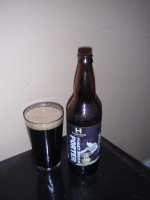 I picked this beer up at my first Bottleworks stop back in Seattle.


My pour produced a 1-finger tan-colored head, fizzy like soda. Dissipates quickly. Beer is dark brown, small amounts of light turn the edges a light brown. It looks and behaves like root beer, except for the color of the head.

The smell is straight-forward: cocoa, caramel, some coffee. No hops presence.
The flavor is initially a blend of toasty biscuit and cocoa. Next up is coffee partnered with cereal grain flavors, rounded out by some caramel. No bitterness to speak of.
While most reviewers report the mothfeel as smooth, and medium-bodied, I would describe it as thin, especially for a porter. Once again, it’s reminiscent of root beer.
Overall, this is a drinkable beer – maybe a little too drinkable. If I hadn’t been drinking slowly with the intention of writing a decent review, I probably could have finished the 22oz bottle in a half hour. To me, that’s not “sessionable,” it’s a quick quaff.
From the Harmon Brewing web site:

This is yet another original flagship brew and of the English persuasion. Our brewer does love his dark beers and decided to brew this slightly unheralded style. Porters, related to stouts, come in two basic styles: Brown and Robust. Robust styles tend to be heavier, stronger and even slightly darker. Brown Porters tend to be more drinkable as a session brew. Our Puget Sound Porter is a lovely dark Brown with strong hints of ruby. A wonderful coffee roasted and chocolate nose makes this Porter unique and enhances the medium bodied brew. The flavors of coffee and chocolate follow through each sip of this porter. 8 different malted barley’s, including Pale Chocolate and dark German barley make up the grist. Two hop additions balance the beer’s flavor. Our brewers 2nd favorite child! GABF Gold in 1999 5.4% ABV and 40 IBUs.

Beerophilia: A blog for beer lovers.

Love at First Sip
Solid
Okay
Not so Hot
May not be Worth the Packaging it Came in
Why the Feck did I Buy This?